Sculptures by Antonio Rizzo in the Doge’s Palace,
restored with the support of Venetian Heritage

From 25 October 2019, the fifteenth-century statues made by Antonio Rizzo are exceptionally exhibited in Doge’s Palace, in the Sala dello Scrutinio. The sculptures have been restored with avant-garde techniques and with the supervision of a specific scientific committee and the support of Venetian Heritage.

Antonio Rizzo was one of the leading figures in early Renaissance Venice. Originally from Verona, where no trace remains of his earliest work, he established himself in Venice after several stays in Padua, where he was able to admire Donatello’s sculptures in the basilica of the Santo and Mantegna’s frescoes in the church of the Eremitani. He certainly visited Florence, where he admired the works of Luca della Robbia and Desiderio da Settignano. In 1465 the doge Cristoforo Moro commissioned Antonio Rizzo to built three altars in St Mark’s basilica. In 1469 he took over from Niccolò di Giovanni Fiorentino as head sculptor on the Arco Foscari, on the side facing the Doge’s Palace courtyard. 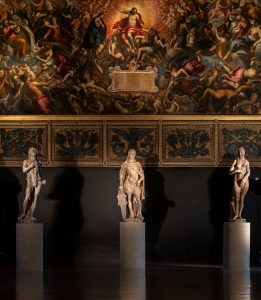 Among the restored statues, the one portraying Warrior (Mars) was one of the first sculptures carved by Rizzo to complete the Arco Foscari, and still shows the style of Donatello and Mantegna.
The influence of Antonio Pollaiuolo, clearly visible in the Adam and Eve sculpted by Rizzo seems to confirm the hypothesis that the sculptor went to Florence a second time around 1470, where he also saw the classical sculpture of the Venus Pudicas, which inspired his creation of Eve.

The statues of Adam and Eve originally occupied the niches in the eastern facade of the Arco Foscari, facing the Scala dei Giganti, also by Antonio Rizzo, in the Doge’s Palace courtyard. Although their dating is not definite, they can be placed between 1470 and 1490. The sculptures are in white Carrara marble, a Tuscan stone that was highly prized at the time and used for the construction of very important works.

The special restoration project, which started in 2016 and ended in 2019, employed a laser cleaning technique which returned the Carrara marble surface of the statues to its original condition.

At the start of the twentieth century the marble surface of the sculptures was in a poor state of conservation due to erosion caused by atmospheric agents. Eve was moved inside the Doge’s Palace and a bronze copy put in its place. Mars and Adam were instead replaced after the Second World War, between 1953 and 1955. You can still see the linear scratches made by the iron blades used in preparing the plaster moulds required to make casts of the statues.
The extensive blackening of their surfaces can be seen in some photos taken at the start of the twentieth century when they were still in their original position, caused by atmospheric pollution, alternating with white areas caused by the wash of rainwater. Such washes were artificially glazed with a dark, fatty pigment, which was applied to all the statues, probably with the intention of giving chromatic uniformity to the surfaces. Numerous linear scratches can also be seen on them, caused by the iron blades used to produce the plaster forms made to create the casts of the statues.
The special restoration project, which started in 2016 and ended in 2019, employed a laser cleaning technique which returned the Carrara marble surface of the statues to its original condition.

The restoration work was carried out by Jonathan Hoyte, a professional restorer, under the technical guidance of a scientific team, consisting of the Fondazione Musei Civici di Venezia, Soprintendenza Archeologia, Belle Arti e Paesaggio per il Comune di Venezia e Laguna, the Opificio delle Pietre Dure of Florence, of the Scuola Normale Superiore of Pisa and IUAV University of Venice. The restoration was financed by Venetian Heritage thanks to the support of the American architect Peter Marino.