The title of Anselm Kiefer’s exhibition—”Questi scritti, quando verranno bruciati, daranno finalmente un po’ di luce”—is a quote from Andrea Emo (1901–1983), the Italian philosopher in whose world of thought the painter sees a reflection of his own. For Kiefer, life and art are born anew from the ruins, from the remains of that which has been. A recurring concept in his works is the symbiosis of being and time.

Kiefer’s monumental cycle of paintings in Palazzo Ducale’s Sala dello Scrutinio, created as a site-specific installation for this space, presents visitors with a convergence of motifs, ideas, places, philosophies, and histories. The cycle of paintings, an endless visual rollercoaster, does not have a narrative beginning or a point of closure. Visitors must choose where to begin their exploration of Kiefer’s Venice Cycle.

The luminous canvas on the south wall, vertically dissected by a golden ladder, provides a visual point of orientation. In this canvas, the artist presents one of his recurring leitmotifs, Jacob’s Ladder. In Kiefer’s art the biblical ladder takes on varied meanings. Here it points to the rise and evolution of Venetian glory from modest beginnings in a marshy lagoon towards victory, wealth, and the high heavens.

Turning westward, we encounter a seascape. Venice’s wealth and identity are born from the sea. The city grew from a simple encampment of fisherman and refugees in the late Roman period into Europe’s wealthiest metropolis and foremost maritime empire by the late thirteen century. But what the sea gives, its proximity also takes—sea routes and floods come hand in hand. The large emanation that explodes through the painting transforms a quotidian seascape into a moment of abrupt and mysterious spiritual intervention. Emanations have featured in Kiefer’s art since the mid-1980s and they are generally an allusion to the process of creation in the Kabbalistic tradition.

The next painting on the west wall portrays a wintry vineyard with rows of vine stakes extending towards the distant horizon. Some of the vines twirl towards the painting’s upper register where they form an organic Venetian arch. Nestled in the middle of this vegetative architecture rests a zinc coffin. Its cover is snapped open like that of a crude tin of sardines. Inside the coffin lie two sunflowers made of lead, one resting on a lead pillow, the stem of the other tucked below it. At the foot end of the casket is a money bag; six others have fallen out and hang on vine stakes at the bottom of the painting. An inscription inside the casket reads “San Marco.” By introducing Saint Mark’s empty coffin into this painting, Kiefer knits a component of actual history into his cosmic exegesis of Venice. The relics of Saint Mark, the patron saint of Venice, are believed to have been brought to the city from Alexandria in 828. In 1063, during the construction of St Mark’s Basilica, which was intended to be the final resting place of its namesake’s relics, his remains could not be found. Somehow Venice’s most prestigious treasure had vanished although, according to tradition, the relics were rediscovered a few decades later. In Kiefer’s Venice Cycle, Saint Mark’s empty coffin is not just a reference to a centuries-old disappearance. It also serves as a potent symbol of a void, an absence, a nothingness at the center of Venice’s very being and of history in general.

The final painting on the west wall of Sala dello Scrutinio is larger than its neighbors. In the upper register, a procession of shopping carts and tricycles, each laden with produce symbolizing Venetian wealth, moves from left to right. Nametags hanging from the vehicles identify this as a procession of Doges, leaders of the Republic of Venice. According to tradition, Venice had 120 Doges between 697 and 1797.

In the large canvas on the north wall, Kiefer veers toward dynamic abstraction. Fireworks of paint and patches of shellac light up the sky. Against an ochre backdrop, patches of blue and white are interspersed with blobs of dark resin. Below the horizon line, in an act of painterly bravura, water and earth become ice and snow.

The bellicose fireworks continue on the east wall. In the painting on the left, a large submarine is horizontally dissected by an emanation that extends across the painting. The boat gutted by this cosmic lightning looks like a giant fishbone. Here, apart from the emanation itself, darkness has vanquished light. A net appears to pull the once mighty naval vessel towards the marshy lagoon below, where helmets of fallen soldiers evoke the notion of death in battle.

The next canvas, 9 meters wide, conjoins different registers of being and time. Atop, the imperial standard of Venice flies in the wind with the winged Lion of Saint Mark watching over the mayhem unfolding below. Palazzo Ducale is clearly visible in the central panel, but it appears to be melting, subsumed by fire and smoke. To the left and right of the decaying Palazzo are two panels that are hard to read. They appear to be populated by crowds of outline figures, perhaps a Kieferian reference to the crowds of tourists that flock to Venice each year. The lower register is Hades, the kingdom of the dead. Here stand the young and old who have perished in the course of history. Their ranks are infinite, extending by visual suggestion far into the distance and beyond the frame. This painting, more than any other in Kiefer’s Venice Cycle, foregrounds the artist’s nihilistic view of history in which humanity’s destructive traits lead to the fall of civilizations.

The final painting in Sala dello Scrutinio approaches pure abstraction. It depicts nothing and everything, being and time without being and time. We see three emanations that harken back to others in the room. Reading the painting poetically, we might imagine how Kiefer’s emanations fertilize the birth of a new lagoon and how new life is born from the annihilation of former life—a Venetian Big Bang. And thus, through an interrogation of being and time, the cycle of life in Kiefer’s existential cosmogony continues.

Download the information cards
of the Kiefer’s Venice Cycle > 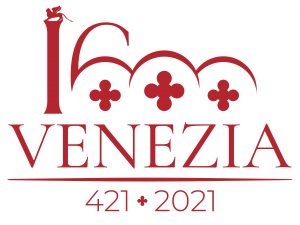